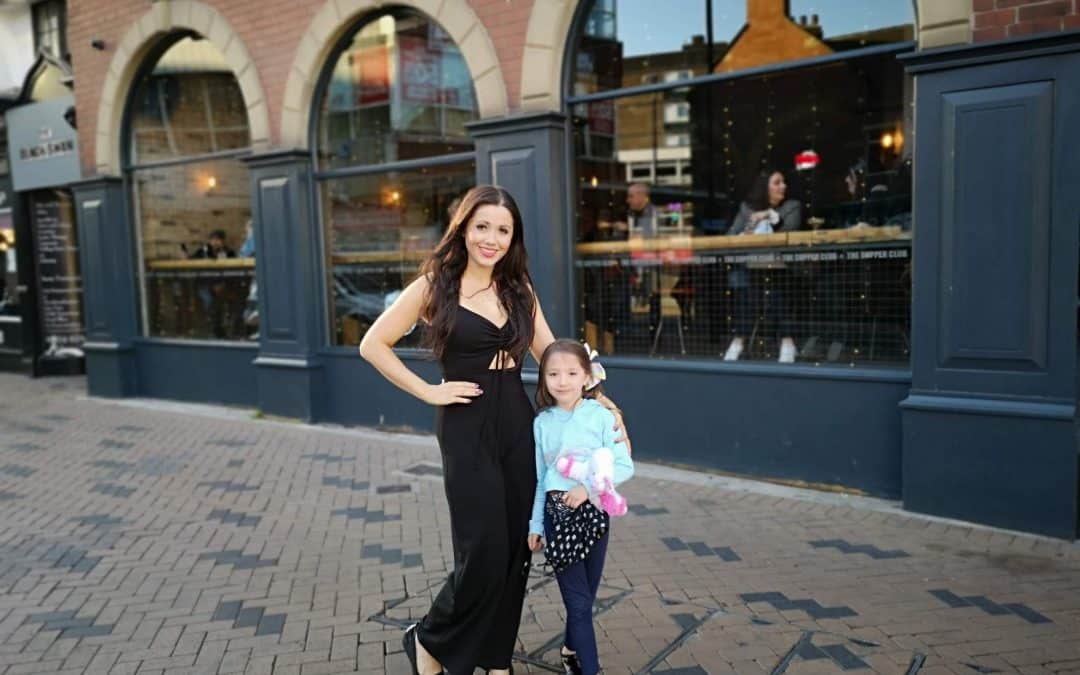 Staring at my face, I would start sucking in my cheeks and pulling any bit of fat with my hands. I was grotesque and I just wanted to be invisible, and this was even before social media really took off...

This Mental Health Awareness Week is focusing on Body Image – how we think and feel about our bodies #BeBodyKind. So I have written this blog for Mental Health First Aid England (and you guys), about growing up mixed race with an eating disorder and learning to love the skin I am in.

I was aged 11-years-old when I started making myself sick. I hated my chubby face, my tall and curvy stature and I hated not being “normal.”

These feelings were largely triggered by my own self-esteem but also by constant bulllying at school. We use the word “bullying” a lot these days that I think people forget how damaging it can be, maybe we should use the word “attacked,” so people don’t underestimate the impact bullying can have on a person.

My bulimia and self-loathing continued into senior school and it came in waves. Normally exam stress or bullying would trigger it.

The one thing that helped was discovering bellydancing. I always felt too fat for most dance classes but I felt I could be me and I could be free when I bellydanced.

But that too became a poisoned chalice when I started dancing professionally and on TV – the scrutiny over my body was intense. I was just 18-years-old and people would openly debate my “belly.”

“You need to loose weight.”

Social media sites such as facebook and youtube had become more prevalant and the comments on my appearance were overwhelming.

“Disgusting.” “Gross.” “Inspirational.” “She’s got a belly like mine.”

I tried to ignore it but people would send me screenshots or tag me in the comments, trying to stick up for me (I now know to either disable comments, block people and most of all try to never read comments on yourself especially on online newspaper articles!).

Aged 19, I was described as “the worst bulimic” medics had ever seen and I eventually became an inpatient in an eating disorder unit.

But even there I didn’t fit in. My weight had fluxuated over the years and I was a “healthy weight.” I felt even bigger than ever.

So I tried everything to refuse food because in my head that was the evil thing that was attacking me.

If only I could be underweight, so my cheeks would cave in and I would slowly dissappear. I was scared of dying “fat.”

My bulimia had been so bad, if my potassium levels had dropped I could have died and yet health professionals said I had a “healthy BMI.”

I got kicked out of the unit for loosing weight and to be honest, I had been admitted too late.

I began to dance again but I struggled with the pressure. I loved bellydancing so much as it allowed me to use my body and move it in a way that just felt natural to me, but whenever I performed my weight would always be mentioned. I was either too curvy or not curvy enough, I couldn’t win.

I had gone from being fresh faced to covering my face with make-up, false eyelashes and having hair extensions.

I wanted to cover up the real, disgusting me.

I started to share my conflict on social media and it was great to have a community of people who would rally around to support me. I found that my “fans” would be largely supportive and accepted me for who I was.

I had messed around with my body so much that doctors warned that my fertility maybe compromised.

But aged 23, I accidentally fell pregnant, I was shocked and yet relieved that I could have a baby.

Over the months my body started to change and I became fascinated with how my body was able to do all of this by itself. I followed pregnancy updates via social media which helped me to feel more connected with my body.

Suddenly it had a function and a purpose far greater than just looking a certain way.

A year after giving birth to my first child, I started blogging. It was Christmas and a time of year I still struggled with. I had family, a child, a partner but my eating disorder and depression reared its head.

That said, it was nowhere near as bad as it had been previously. So I began to blog about it, surely I couldn’t be the only one struggling inside with a secret illness?

I cringed as I pressed “publish,” as I was really putting my darkest emotions out there for the world to see.

But within hours, I started to receive messages of support from other people and carers suffering in silence.

My worries subsided as I began to focus on the importance of sharing and supporting others who were where I had been previously.

I continued to blog as it became a form of escapism and a creative outlet for me.

Then aged 25 I fell pregnant with my second child but this time I really struggled with my mental health during the pregnancy. I had been experiencing psychotic episodes and my whole reality was confused. I became disconnected from my body and the world.

The one thing that kept me safe during that period was my unborn baby in my stomach. I couldn’t harm myself because I would have harmed my baby.

This was when I began keeping a video diary because I struggled to even write. This later became my vlog and helped me to launch a youtube channel (https://youtube.com/sophiemeilan).

I managed to control my eating disorder however until it reared its ugly head after I’d given birth. I think the pressure to “bounce back” after having a baby is immense. Or even what we should or shouldn’t look like (just look at the conflicted scrutiny over Meghan Markle’s pregnancy and post-natal body, she can’t do right from wrong if you go by what people are commenting on social media).

My mental health care co-ordinator tried to refer me to eating disorder services but I had to travel 1hour and 30 minutes on buses with a baby to get to my nearest one (and then I was told if I was to start treatment properly I couldn’t bring the baby.). So quickly through lack of childcare and travel anxiety, I was discharged back into the “community” care.

So again, I turned to social media to vent my frustrations and even set up my own facebook group through my Mama Mei page so that people know matter where they live could at least access peer to peer support online.

I am now 31 and my daughters are 4 and 7 years-old. I am acutely aware of how big a pressure and impact the online world and social media is already having in their lives (without even having their own accounts). So rather than avoid the issue I thought we would make it fun together and we set up our own Make and Move youtube channel to get family’s making and moving together.

I am also very careful what I say about food and our bodies and try and focus on health, fitness and being strong. They are very much in a Youtube and Netflix era in terms of what they consume media wise which is a double edged sword. For me, I worry about the dark side of the internet and social media with all the trolling specifically around looks and body shape. The constant stream of images and opinions online is stressful enough for me (and I should be used to it as a journalist), let alone for young people during their formative years.

But then again I also see the positive side of seeing so much diversity online. When I was growing up there weren’t many protagonists in films or on TV shows that I could relate to, but now there are lots more characters I have seen that reflect varying backgrounds (for me being mixed race, from a poor area in the North of England, growing up with gay parents and struggling with mental health problems), especially on Netflix. I hadn’t quite realised until recently.

So whilst it’s easy to blame social media for our body image issues (and there is some blame), I do think it’s more complex than that. I think as content creators or so-called influencers we need to be responsible online about whether we’ve photoshopped or face-tuned our bodies in some way and we need to ask ourselves, why are we doing such things? Because what actually is perfection?

I look back and I now realise that some of the issues over my face and body stem from being mixed race and that feeling of wanting to fit in. I wanted to be blonde haired, blue eyes and petite, but now I am just so happy to be me. I happy that I am different. I don’t mind standing out. It would be boring if we were all the same.

So in terms of body image, I am 75 per cent there, because life’s a journey and I won’t lie and say I am completely happy with everything but for my daughters and followers, I feel that I have a duty to try and love myself as much as I love others.