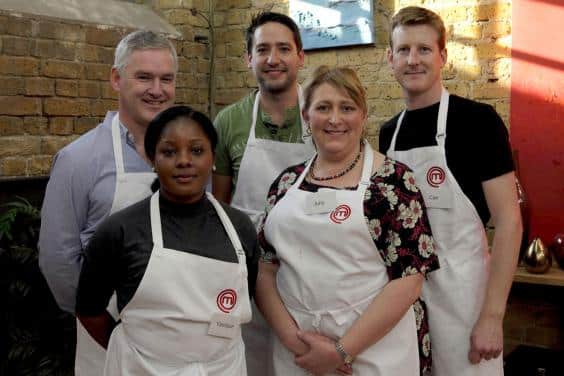 Never thought you’d hear Indian and Sushi as a dish? Well I never thought I’d taste Indian Sushi until my partner Chris Hale, who was on BBC’s MasterChef last night, came up with the “weird” but “ace” concoction.

Those were the words of MasterChef judge and chef John Torode who revelled in the unique combination of flavours.

Even fellow Judge Greengrocer Gregg Wallace said: “I bet there’s someone watching this saying I’m going to set up an Indian Sushi restaurant.” 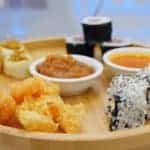 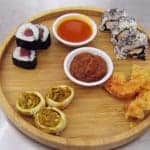 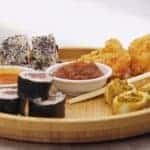 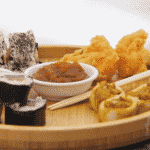 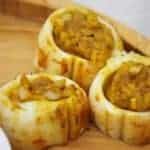 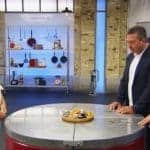 And it wasn’t just Chris’ Indian Sushi which caused a stir in the MasterChef kitchen and trended online.

But he wet appetitites with his “theatrical dessert” of chocolate soil, banana ice-cream, tempered chocolate with a warm caramel sauce. (I am always a willing tester for my hubby-to-be’s desserts!)

It went down a treat with the MasterChef judges and former contestants who all enjoyed pouring the hot sauce over the chocolate which melted through to reveal the ice cream and chocolate soil.

But it was the CHOCOLATE SOIL (aka Chocolate crumb) element which caused a buzz online.

Chris’ dessert which wowed the judges

Well in case your more of a savoury person a fellow contestant on the BBC cooking contest Cae admitted to cooking his Salmon in the dish-washer which has become a new online cooking hack.

And of course as on every cooking show now most of the chefs did some sort of reduction, we love a good reduction.

But it’s been the chocolate soil that’s sown the most intrigue.

Everyone wants the dirt on Chris’ Chocolate soil

But that’s not forgetting that he now lives in Yorkshire…

Well done for taking all the attention with a pinch of salt Mr Hale – we all love you tons and are so so proud of you. It is one of our favourite shows and somehow you managed to stay cool, calm and confident even with your Cabbagy Kale Quail Pigeon blunders 😉

Roll on the Quarter-Finals!

Chris’ Indian Sushi fusion and chocolate soil have gone viral, but can he make the same impression in the quarter-finals?
MasterChef continues on BBC One…
Tweet @AllHaleChris using the hashtag #MasterChefUK