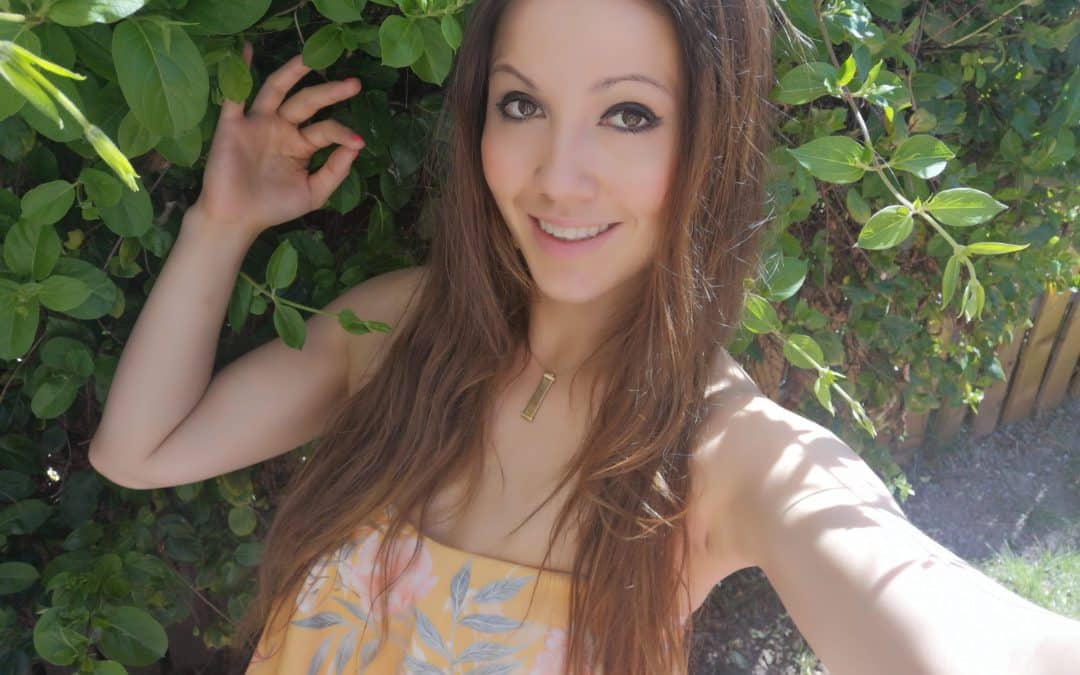 What is Reiki? Does Reiki work? Here I share my personal experience of Reiki aka energy healing for my mind, body and soul.

Reiki aka “energy healing” is a complementary therapy which can help to alleviate stress and anxiety through palm healing or a hands on approach.

When I first discovered Reiki I was a bit sceptical as it looked a bit odd as the practitioner often hovers there hand over you to help heal with universal energy.

Although, I succumbed to the offer of Reiki during a traumatic time in my teenage years as nothing else was working.

I remember lying on a sheet on my living room floor and thinking “what will this do for me?!” But as I lay and closed my eyes I began to feel this heat. It was mainly around my head as if just my head alone was in a sauna (and I remember thinking, wow this woman has superpowers). After a while I felt heat in my left knee and hip.

At the end of the session, the Reiki Master / Practitioner asked me about my experience. I explained about the heat specifically radiating around my head.

She too had felt this heat really strongly. She said that it was probably due to me experiencing a lot of stress and trauma.

She also asked about my hip and knee as she could feel a bit of warmth from those areas too and I explained how I had a dodgy knee and hip but nothing serious.

Beyond Healing at home

Fast forward 15 years and I am now receiving Reiki treatment again, this time from a Yorkshire based couple of practitioners, Pris and Mark, who run Beyond Healing.

They are just the most lovely people, do you know those kind of people, who just give and radiate warmth, well that’s them.

Mark tends to do Usui Reiki and Pris his partner tends to do Angelic Reiki (an explanation of the differences of those types of Reiki is below).

I always get anxious when I am first treated at home whether it’s a hairdresser, mental health nurse, nail or Reiki practitioner, I always panic about the state of my house. I’ve never been the tidiest of people and my standards have massively dropped since having kids. So when I have a professional around, I worry about the state of my house, which if entered unexpectedly could look like a messy crime scene.

Luckily, Mark and Pris (like other visitors) weren’t phased by my failed attempt to clear up after the kids.

Mark asked if he could smudge my living room.

Smudging is a practice of wafting and diffusing the smoke of herbs around a space and person to help cleanse from any negative emotions.

I was also quite relieved that the smell was pleasant and faded out the smell of spilt milk from my daughter’s abandoned cereal bowl.

Smudging helped get me in the Reiki zone too from rushing home after the morning school run and frantically trying to tidy up to now trying to be in a state of bliss and ready for therapy.

Mark and Pris had laid out their massage table bed where I could lie to have my treatment.

Mark practices Usui Reiki… But what is it?

The Differences between Usui and Angelic Reiki

There are thousands of different healing modalities around the world, some of which are based on homeopathic methods, some of which are based on the use of essential oils (aromatherapy), and there are also a wide variety of energy based healing methods. One of the most widely known types of energy healing is Reiki, many people have heard of this but in general there is still a lack of understanding as to the techniques and methods behind the practise of this form of healing. Perhaps the two most widely practised forms of Reiki in the western world are Usui Reiki and Angelic Reiki.

Perhaps two of the most widely practised and recognised forms of Reiki in the modern age are Usui Reiki and Angelic Reiki. Usui Reiki adheres as closely as possible to the original teachings of Dr Usui and was rediscovered in the early 1900’s. Angelic Reiki was formulated and developed in 2002-2003 by Kevin and Christine Core. The Angelic Reiki method of energy healing has many of the elements of Usui Reiki including the use of sacred symbols, and there are also some similar elements as part of the attunement process. Attunement or initiation is when the person wishing to learn Reiki is put through a mixture of ancient rituals (that are probably based on shamanic practices), meditations, and study by a Reiki master in order to attune them to the energy that they will be working with as a channel for Reiki.

Although Usui and Angelic Reiki both fall under the umbrella of Reiki modalities, they are totally different in technique and execution. The overall attunement process for each style is also markedly different. A master of each respective modality must attune the person wishing to learn the techniques of the healing form, in Usui Reiki at second level (which is the practitioner level) the student is taught to use individual symbols to target specific areas and methods of healing, such as distance healing and mental and emotional healing. There are many similarities and differences between these two forms, and there is no way to ascertain whether one form is more or less effective than the other as there have been a multitude of successful treatments using each respective modality.

The symbols are sacred and have only recently been allowed to be shared on such a wide scale, in the days of Hawayo Takata (who is credited with bringing Reiki to the West) students would be shown the symbols once and then expected to memorise and utilise them from there, this resulted in many interpretations of the sacred symbols being brought forward. With Angelic Reiki there are also symbols, some of which are the exact ones utilised in Usui Reiki, but the practitioner is not expected to memorise them as they are anchored within the energy field of the user and are activated automatically when necessary.

One of the main differences between the two forms is in the treatment itself, a treatment of Usui Reiki uses at least twelve hand positions, and when treating certain areas of the body such as the heart, stomach and genital area (this is also the location of the base chakra) the practitioner will generally place his hands slightly above the body and channel from a distance of a few inches. There is generally fewer hand positions in Angelic Reiki, some practitioners choose to simply place their hands on the shoulders of a client and channel energy from this position throughout the duration of the treatment. Some practitioners of Angelic Reiki will utilise other hand positions, such as placing the left hand on the body just above the heart around the top of the sternum and the right hand around the solar plexus.

Although Angelic and Usui Reiki both fall under the Reiki terminology, there are many differences and a person should opt for the method they feel most comfortable with.  The frequencies of the energies are totally different from a practitioner point of view yet both styles facilitate deep healing on many levels. One of the main benefits of Reiki is its ability to enable an individual to confront the underlying cause of their illness and address the source of the problem. Many people have had life changing experiences as a result of a successful Reiki treatment or becoming a Reiki practitioner and the energy can also be safely channelled to help animals and children.

After a lovely treatment, I felt super zoned out. It had taken me a while to relax as I had been running around all morning but Beyond Healing had worked their magic and helped me to enjoy some healing quiet time. I never nap in the day but I struggled not to fall asleep.

I had gone from frantic-busy-mum-mode to listening to my body and being mindful about where I was and how I was feeling.

What I love about Pris and Mark is how down-to-earth they both are which breaks down a lot of barriers when they first come into your home.

Pris had offered a follow-up treatment of angelic reiki which I definitely wanted to try, now I am a Reiki convert!

The treatment is similar in the sense that you lie on your front on the massage table. But instead of moving around like the previous treatment, Pris stayed at one end and had he hands on my shoulders.

She explained she was going to call her archangel to help her give the treatment. It is all done in silence with her hands on my shoulders.

During the treatment, with my eyes closed, I felt a warm glow and saw orange. I also saw a variety of different people from my past but the ones who was really prevalent was my nan who passed away 10 years ago. I was really close to my nanny which may explain why I saw her so strongly.

I also saw my Grand-dad and Grandpa who have also passed away.

There were also some not very nice people from my past but I only saw a brief view of them for a few seconds unlike my grand-parents.

Before I knew it the treatment was over and the time must have passed really quickly. Pris explained that seeing a variety of colours is totally normal and that people had been trying to speak to me.

I felt super chilled out after, it was just ashame I had to go to work as it was nice just to be at home and feeling proper zen.

Reiki (‘rei’ means soul spirit and ‘ki’ means life force/energy) sounds a bit bizarre if you’re like me and can be a bit sceptical about alternative practices. But like with life and parenting, I just go with the flow and try for myself. I am so glad I returned to Reiki after so many years. I was worried it would remind me of my trauma but actually what it did was remind me of how far I have come since then.

I’d definitely start out with Usui reiki if you’re unsure and then go on to angelic reiki. But I am well and truly hooked so I can’t wait to try out past life reiki with Pris too… more about that soon!

I can’t recommend Pris and Mark at Beyond Healing enough for some good, honest and down-to-earth complementary therapies treatments.

They do a range of community reiki packages in Wakefield, West Yorkshire as well as Reiki shares and at home treatments.

For more information on Beyond Healing and Reiki, go to their facebook page: https://www.facebook.com/beyond.healinguk/