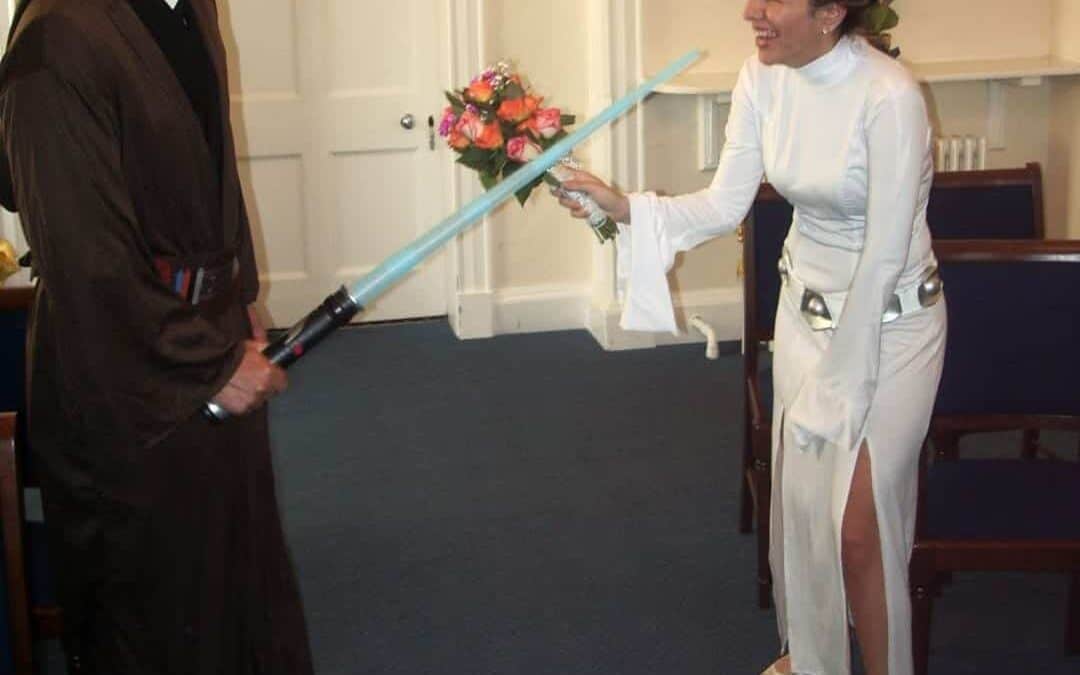 My friend Luciana Watson has a point. I stumbled across her impressive wedding photos where she can be seen tying the knot in full Star Wars costume and not only does she look fantastic but it looks like they had loads of fun.  Her photos certainly stand out from your ‘normal’ wedding day poses.

Prior to seeing her photos, I had smugly been browsing through my Facebook newsfeed looking at some of my friends who had been forced to endure the build-up to a new Star Wars movie, whilst my other half has little or no knowledge that there is even a new film out  (he lives off Sky Sports whereas I’m a BBC News junkie).

But seeing Luciana and her husband James’ wedding photos – it got me thinking – maybe it isn’t so bad being a Star Wars WAG or HAB after all.

There’s nothing wrong with a bit of passion (OK borderline obsession) and I’m always looking for an excuse to go somewhere in fancy dress. Plus it invites us grown-ups to be big kids again!

Don’t get me wrong Star Wars isn’t my cup of tea and if I go out in fancy dress I’m more of a Rocky Horror person. But I love the idea of my fiancé Chris and I getting dressed upand not caring what people think of us.

I am starting to warm to the Star Wars phenomenon. It’s particularly current this week as well with the first publically funded Briton Tim Peake blasting into space (Yorkshire-born Helen Sharman was the actual first British astronaut).  So educational as well.

To all you excited fans, may the force be with you. For the rest of us, it’s Christmas next week hurrah!