Summer Insanity: A Thank You letter from my eating disorder

Getting “Bikini Body Ready”? Slimming down for summer? Or just Six weeks to a six pack? Fasting your way to a fitter you?

My eating disorder just LOVES this time of year… rather than it being treated as an unwanted illness, it is put on a pedestal and given a gold medal.
Its weird and insidious ways no longer have to be played out in secret, oh no, its behaviour is proudly plastered on the front of magazines and pinned on Pinterest as a desirable asset.
My eating disorder’s features are contoured in such a way you’d never see its bulges or blemishes, its mask is photo-shopped to make you believe it is attractive and its bullyish language is written up and disguised as positive mantras and everyday affirmations.

So as it only is British and polite to do so… here is a Thank You letter from my eating disorder:

Dear society,
There’s normally a conspiracy among health professionals against me but I just relish in this time of year. So Thank You!
Thank you for promoting my beliefs (no matter how crazy they sound ;)) and thank you for introducing me to new clients young and old.
I used to have a mainly female client base but now you’re helping me to cast further afield too. In fact, I’ve never recruited so many men in one year.
It’s great too how we can all make money from “my people.” Just offer them hope, put too much focus on their looks and their body and make them feel out of place.
Tell them lies about the road to happiness and take over their minds, so all they can think of is food, exercise and of course, me.
Each year, I feel like I am on the campaign trail, in the run up to Summer, and I am able to drum up so much support, even from the powers that be, without ever needing to hire a spin doctor.
So from the bottom of my heart thank you!

Thank You for hiding my flaws, thank you for helping me to get into so many heads, hearts and families and, THANK YOU for giving me my chance to shine this summer.
Yours severely,
Eating Disorder x 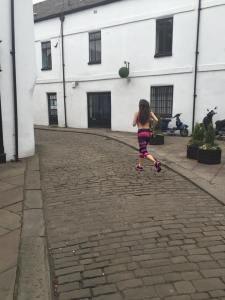 But the bully inside me ain’t pretty

Don’t believe the hype, don’t give up your bodies and headspace and don’t be fooled by an eating disorder.
You won’t find happiness in an eating disorder’s false hope. It won’t help you cope.
Just because it’s the norm to obsess about food and treat our bodies as objects, doesn’t mean it’s right.
I’m not saying that every diet, every fad and fitness regime will lead to an eating disorder.
But let’s be mindful with our language, let’s look for the positives in our lives and let’s not judge another on what we do or don’t consume, what we do or don’t do and how we do or don’t look.
Because the reality of living with an eating disorder can be so dark, so lonely and it can kill you.
I know because I have lived with a range of eating disorders since I was 11-years-old.
And I am so glad to be here to tell the tale although recovery is a long path.
So enjoy the summer, enjoy the beach and most of all enjoy your mind, body and life.