GROWING UP WITH GAY DADS: LGBTQ RIGHTS PAST, PRESENT AND FUTURE… WAVE THE RAINBOW FLAG FOR PRIDE

My dad never had to ‘come out’ to me as gay – as a kid I just accepted it.

The beauty of young children is that they are born with open minds. And unconditional love is all they need to thrive.
I was only three and my sister five when my parents broke up and my dad started living with a man. It’s society that feeds prejudice and intolerance.
When I started school, I started to ‘filter’ our private lives, I somehow knew that my world was not the acceptable norm.
My dad’s partner became our ‘lodger’.

The only thing was lying about love that was so alien to me. I was bullied, had my coat burnt and school taunting language was often homophobic.
But that’s just on of the reasons why we need Pride Month every June. We all need to March side-by-side celebrate, remember and campaign for a better future world wide. 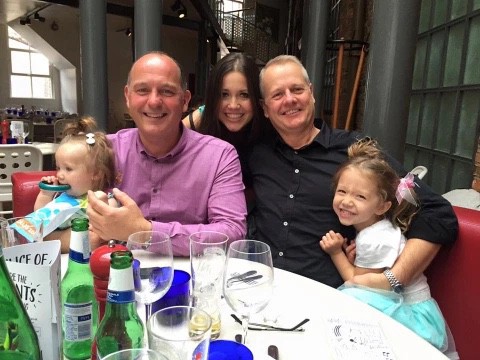 Nowadays, things have progressed but only marginally so, I just find it’s more behind closed doors. So since my kids were babies I’ve been taking them on Gay Pride marches with my dad and his husband.
While in their world it’s just a fun and flamboyant day-out with their ‘grandpopsies’, for me, it’s vital that they understand the fight for equal rights as young as possible.
I want them to be equipped with the strength and knowledge to be who they are regardless of their race, sexuality, gender or anything else.

“Watching television with my Dad in the 1970’s was not the easiest thing to do. “Turn that man off!” he would rant – the demand invariably littered with expletives and comments about what he would like to see happen to ‘men like that’. These were the days before television remote controls. Buttons were pushed – both literally and metaphorically.The men who caused my Dad such angst were those he referred to as ‘Queers’, or by the more liberal-minded members of my family, as ‘the other way’. Effeminate, camp celebrities such as Larry Grayson, Kenneth Williams and John Inman – popular celebrities whose humour was based on innuendo and double-entendre such as ‘what a Gay day!’ but who denied their homosexuality – all despised by my Dad.

Growing up in such a world, where hatred of homosexuality abounded, where gay men in particular were vilified and seen as deviant and predatory, was not the best environment in which to develop a heathy attitude to one’s sexuality. And lesbians were not entirely immune to this vitriol and negativity – that’s when their ability to have meaningful sexual relationships was even acknowledged.” 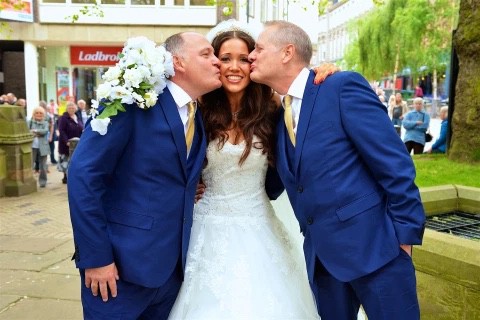 Technology has improved faster than equality with the likes of TV remotes. Although the internet has in some way helped with key LGBTQ YouTubers such as James Charles who my daughters adores and Tiktokers. And thankfully there doesn’t seem as much discrimination towards sexuality.
But the world needs to understand, campaign and learn lessons from history that this hasn’t always been the case and that there are still a lot of people who don’t have open minds.
You only have to read recent comments section below any online newspapers on Pride to see why we need to campaign. The Pandemic has also had a haemorrhaging hit on LGBTQ+ communities.
Let’s strive to lift lockdowns on values now.