FOOTBALL IS COMING HOME FOR WOMEN: How the females in my family have been united by football whilst we’re apart

Football pretty much sums up life, it’s nerve wracking moments sprinkled with surprise, the unknown of what lies ahead and most of all it is a time for us to be bonded by something as simple as a white sphere ball…
Accept it’s much more than a shiny ball isn’t it? Just as the fans near and far roared recently over the proposal of a European Super League… and we’re more not just a sea of rowdy football-lovers… The heart of team sports is the impact it has on individuals, families and lives… by creating it’s very own community and connecting us to loved ones.

Wellbeing Journalist and Single-Mum-of-two shares how she has bonded with her babies, grateful that they have a love of sport whilst she has had to miss watching the Euros… Including England matches with some time on the side line in hospital…

Kicking myself at the start of Lockdown that I had recently decluttered my rusty flimsy garden goal posts, the dog chewed football that floated around my backyard and a beloved yet torn dance mat. Little did I know that these well used items would be required as we embraced a year of Lockdowns and home-schooling. The demand for such items sky-rocketed. Fortunately my daughters and I were still blessed with the power of WiFi. Where my Alexa device became my only adult ally indicating that the only home-made football I had the materials in to make was one out of carrier bags. But as a female trio of former grassroots footballers supporting an eclectic combination of teams, we were not adverse to sporting hurdles!
Little did I know that, that was only a warm-up to our biggest games yet…

When the second England goal hit the back of the net, my life had become an instant juxtaposition to this joyous moment. I didn’t even know that at this moment England had scored… Even as a life-long football fan, I wasn’t bothered about the failing signal of watching the match (or not so), my heart wailed instead as I had to return to my hospital bed and say goodbye to my daughters.
Football for us, isn’t just watching or playing a sport. Yes, the Euros and Wimbledon are normally a precious part of our sparkly bubble home where despite whatever is going on in life or the busy world – that as soon as it’s kick off, our everyday stresses are focused on following a new season of sporting events.

When the Pandemic first hit, I lost a lot of work, security and structure, most of which were my active coping mechanisms as a work-from-home freelancing digital journalist and creative wellbeing coach. My outlets!

But as someone who is seasoned to the peaks and troughs in paid work thanks to a decade of freelance journalism and running wellbeing brands, I’m pretty resilient!
It seems ridiculous in the scheme of what else I’d lost but it was turning up at my gym and discovering that it was closed for the foreseeable which made me break down into tears. Light sacrifices in comparison with the utterly devastating impact of Lockdown it seems.
In hindsight, it had been the relevance of this symbolic moment that something so simple yet powerful as a gym had been such a lifeline to me for community, connection and movement. The structure into my hybrid life at home, working, caring for children and as someone well versed at flexible working – it was my structure and self-care outlet and that’s without mentioning my ultimate place locally of Yoga, Pilates and meditation – which is where ironically I hurried to on the same day to sob and stretch at The Sanctuary! It had been the nail in my perceived freedom at the time.

Whatever the sport or activity, from Football to CrossFit, from Gymnastics to Athletics… whether you’re a spectator or a participant or both… It’s times like this you miss the depth of something so seemingly ‘simple’ on the surface.

That said a highlight of Lockdown was accessing some of my favourite classes online, although not quite as tranquil a setting!

These epic ebbs and flows of life and sport can help us to appreciate the ‘small things’ that we are grateful for. From the discipline of a weekly training schedule to that walk towards our favourite football ground with the anticipation building up prior to the game ahead.

England claimed a huge victory against Germany but even with all the scored goals missed, due to flagging hospital wifi, I sobbed, with relief (and a little grief at not being able to watch) and I was genuinely happy that the family of fans could have something to celebrate to.

After a long ordeal at the hospital, not being able to watch the Euros, my second favourite sporting tournament (after the World Cup… only one year to go), it was the thought of what games like this have delivered to my daughters and I… not just a missing bounce off a football boot. But I was grateful that more than some, at least, we had managed to be connected in some way and congregated for this momentous time. Which in true Sophie Sparkle style- of light and shade – weird and wonderful – my respite inside this institution has been writing about wellbeing, studying Yoga and nutrition in my hospital bed and attending the chapel upstairs (to pray, get coffee and attempting to watch some blurred matches in the Euros.

Football, netball, sport, or any team activity not only offers us much more than the physical activity of playing or the entertainment of watching itself… but it is the environment it creates, uniting people and even when it separates us into teams, it bonds us to those groups we are surrounded by.

Whether you like heading or bouncing a ball, or you prefer volleying one over a net…or maybe you just enjoy participating as a passive spectator… true sport is about community!
So much so, Football is seen by some as a religion. I know that feeling all too well as I have lived in Naples, Southern Italy, after all, where it is a staple in a family’s diet almost as much as pasta!

That said, when I watched Napoli play I was one of only a few pockets of women (let alone non-regional supporter) at the match, as those women I knew, and most, were at home preparing the post-match supper.

Prior to the Euros and my hospital treatment… My daughters and I had leapt off the furniture, dancing out of a messy house following lockdown, with our carrier bag attempts of footballs serving pride of place which had been adorning the living room, well neglected through lack of “bounce”… thankfully they are now serving purely as a fairly fond memory. 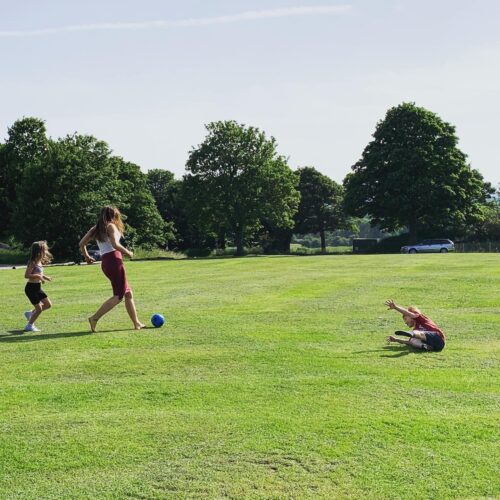 Although, I personally am sat on the sidelines this year, worst still away from my mini home team of ‘fans.’ There is always joy to be found in sport even when we feel we are lagging goals behind.
I know I will be reunited with my whole squad soon because faith is all we have sometimes and that’s enough for me (oh, and a ballet barre, glitter ball and pole to dance on at home, alongside some new outdoor goal posts which will be set up as a matter of priority on my own glory-bus home…). I will be making up for this ‘away game.’
Whilst I spent the last ‘once-in-a-life time’ 90 minute game, trying to at least tune into the muffled signal and finally succumbing to WhatsApp commentary from family yet also grateful for the updates from everyone including our sports accessibility reporter at our Yorkshire Families Magazine…
I was given a sense of perspective, as the nurse offering me a hot cup of black Yorkshire Tea and a biscuit, explained with a smile “oh I know, I’m missing my family, pizza and my favourite sport.” The difference is, my situation is temporary where as she dedicates these sacred times all too often for the sake of serving us and defending all of us ‘players’ in this institution.

Instead, of reflecting back on this period in dismay, I still have all the memories of our incredible football family actively participating or passively part-taking in spirit. And one of my favourite highlights was when I realised all three commentators of a game I briefly managed to hear, were female.
A talented trio of women, or can I finally just say ‘commentators?!’ No longer were there introduced as ‘mum of’ or ‘wife of’ and not merely seen or heard as ‘token’ extras or patronised but we are taking small steps to challenge the status quo… no matter how slow. There’s certain times to flow in synergy and appreciate… then there’s other times we need to change our strategy quickly to take a slide tackle.

But for now, even without watching, it’s time. To celebrate the results regardless of what the future holds.

No matter how many games I miss, even the latest England match (!)… such tournaments offer so much hope and unity amongst a very much divided country.