‘Two-thirds (64%) of LGBT+ people have experienced anti-LGBT+ violence or abuse. ‘Only 1 in 8 LGBT+ people of those surveyed in Galop’s Hate Crime Report 2021 had reported the most recent incident that they had experienced to the police. Less than half of those who did report their experience to the policewere satisfied with the response.’

My Dads sent me photoswith their “adopted daughter” having a drink together when they bumped into each other outside Sheffield’s longest-standing Gay Bar.

It reminded me of when their adopted daughter aka my best school friend had been trying to set her mum up with my Dad, at first I was too scared to explain to her that I knew my Dad really would not be interested because he was more ‘interested’ in his “lodger” aka partner and now husband.

The photos served to remind me how far we have come in that they now they could openly share drinks and images inside Dempseys Bar.

But before we cheer our glasses at how things have changed for the better, the owners of that same bar have recently been forced to condemn police in an open letter, claiming the force has repeatedly failed to respond, with staff and customers regularly receiving homophobic abuse when leaving the bar.

You’d think from the media portrayals and the police’s invitation for more victims of hate crime to come forward, that homophobia is no longer tolerated in today’s society. 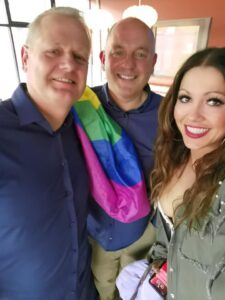 “Your Dad’s a battyman. You should be ashamed,” were chants I endured on the bus home as a child. I had hoped this sort of homophobia had subsided, not to mention some of the more violent hate crimes against LGBT+ people themselves. We may not hear such chants as openly nor hear about as many attacks in the national mainstream media but sadly homophobia is alive and well.
‘Two-thirds (64%) of LGBT+ people have experienced anti-LGBT+ violence or abuse. ‘Only 1 in 8 LGBT+ people of those surveyed in Galop’s Hate Crime Report 2021 had reported the most recent incident that they had experienced to the police. Less than half of those who did report their experience to the police were satisfied with the response.’

As my Dad, an LGBT+ Campaigner explained:

“The media representation of LGBT+ issues leads many to believe we are a much more accepting society when it comes to LGBT+ people. Whilst this may be true among some sections of society sadly it’s not the whole picture. We’ve recently seen a conviction of three people over the brutal murder of a doctor in a Cardiff City Centre Park.

“Hate crime against LGBT+ communities increased during the Pandemic with some  sources suggesting that  minority communities have become the scapegoats, linking it back to the last notable pandemic which was HIV and Aids.”

While it’s important to understand the abhorrent injustice for LGBT+ communities as the ‘victims’ of such attacks, it is also essential to recognise the incredible pioneering work that such communities have brought the world from famous footballers,  artists to authors and incredible musicians.

This month marks LGBT+ History Month and 2022 sees the 50th anniversary of the first Pride march in London.  We have come a long way in recognition of LGBT+ rights but there’s still a long way to go.

There is always hope. The LGBT+ History Month tagline being ‘the arc is long’, from Dr. Martin Luther King Jnr’s quote: “The arc of the moral universe is long but it bends towards justice”.
Read more from Sophie, https://www.mamamei.co.uk/all-blogs/ Follow @TheSparkleCoach